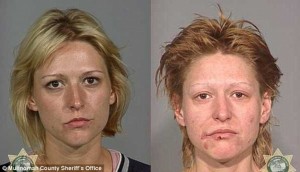 Drug abuse is a sure fire way of damaging your appearance. Whether it is brief or prolonged, it is bound to have negative effects on the way you look. Drugs are ingested in a number of different ways and they are made up of a widely varying array of substances, but because they have profound effects on the brain and the body’s systems, there are noticeable similarities in the devastation they cause to people’s physical appearances.

One effect that nearly all drugs, legal and illegal, have on a person’s appearance when they are abused is the destruction of the skin. Mild drug abuse can cause break outs, swelling, the constriction of blood vessels and other skin irritations, while heavy drug abuse can be responsible for visible sores, skin erosion and spots, depending on the type of drug. It is also common to see skin discoloration in the form of yellowing or graying due to the carcinogens and toxins found in many drugs.

Many drugs do damage to the teeth and mouth. A number of drugs yellow the teeth, while others actually cause decay and eat away at the enamel. Mouth sores, bad breath and discoloration of the flesh in the mouth can also occur.

Drug abuse is frequently the cause of weight fluctuation for a number of reasons. Most drugs have some kind of effect on the appetite and on the metabolism. Marijuana, for example, tends to increase the appetite, causing overeating, while a number of heavier drugs reduce the appetite and substantially cut back on food intake. Drugs can subsequently be the cause of muscle deterioration, due to the distraction they can cause an exercise regimen, and due to the presence of toxins in the blood stream.

If you or someone you know is declining in physical appearance due to drug use, substance abuse treatment is the most reliable way of stopping the problem before it does permanent damage.